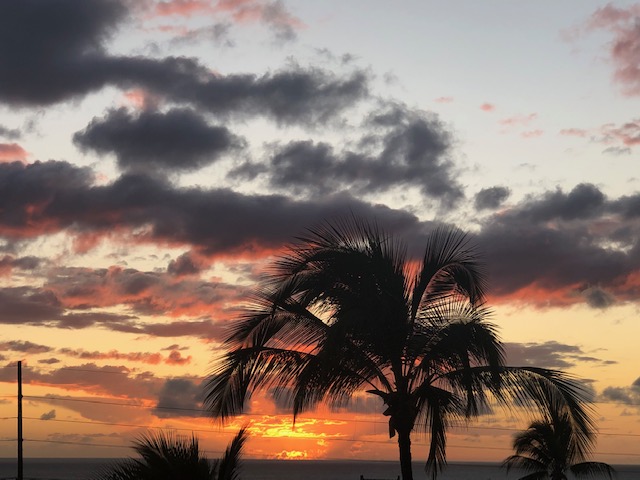 One of my favorite things about living on the island is the way everyone falls in cadence with the sun.  Being from the far north, I’ve lived my life fixated on sunshine (usually to the point of neurosis by mid-January), but it was always too little or too much, never something to we could consistently count on or structure our actives around.   It’s as if I lived my life surviving on months of meals comprised of a few breadcrumbs, then gluttonous belly aching feasts; now it’s three square meals a day.

Living so close to the equator, it’s only natural to wake with the birds as they sing in the sunrise, and then unwind from the busyness of the day while watching the sun gently slide under the sheets of the ocean.

It still feels unreal to inhabit an environment that is not only hospitable, but also aligned with my own circadian rhythm.  I’m quite convinced that humanity was meant to reside in the tropics, waking and sleeping with the sun and moon, living on lilikoi cheesecake and coconut crusted mahi mahi.  Why did we ever trek to such hostile environments (its 52 below zero where my husband is working) and not immediately turn around and leave?!

I’ve come to enjoy meeting with friends for sunset dates.  Sometimes we meet at my “office” (a special tree on a nearby beach where I am most productive- also where most of my photos were taken), on our lanai (aka “deck” for northerners) or my favorite spot, on top a paddleboard bobbing in the waves.  It was during one of these dates that God revealed some powerful truths to me.  My longtime friend, Anoushka, was sharing how as an artist she especially enjoys the moments after the sun has set; the colors actually intensify for 15-20 minutes after the sun is no longer visible. Until that day, I tended to turn away and head back to dinner prep as soon as the sun sank out of site. Show over.  I had no idea I was missing the most marvelous part of the evening!

Her words touched a sore spot in my soul.  I was still healing from a painful season of what felt like abrupt endings (like the hasty sunsets on the equator!); selling the farm, empty nesting, broken friendships.  I had been sitting under that tree, watching sunset after sunset as I grieved, not realizing that the beautiful part was yet to come.  It was in those difficult, closing moments when I thought He was gone that He was painting the most color and character into my story, making it a masterpiece.

And the clouds.  Balancing my preoccupation with sunshine was a crazy aversion to clouds.  In my simple mind, clouds just blocked the sun- and I could never have enough sun.  Years ago I pondered the fact that God led the Israelites as a pillar of cloud (Exodus 13:21), and his glory appeared in a cloud (Exodus 16:9-10).  I remember asking a fellow Alaskan why she thought God used clouds, and she reminded me that the Israelites lived in a hot climate where protection from the sun would be considered a blessing.  This was a foreign concept to me, but it made sense.

I naturally want to shun clouds. Heartbreak, unanswered prayers, loneliness, death, divorce, ongoing sickness, miscarriage, slander, addiction- my family has faced a slew of challenges the last few years and I just wanted them all to go away.  I don’t appreciate things that seem to inhibit my view of God.  A perfect sunset is cloud free, right?

As I sat with Anouska that evening and paid attention to the post-sunset sky, I was stuck with the beauty of the clouds.  There was a gorgeous array of cumulous, cirrus and stratus clouds catching the sunken rays and spraying them all over the heavens. Were it not for the clouds, there would have been nothing for the light to reflect off of, nor any texture in the smooth, dark sky. My heart was filled with peace as I thanked God for the clouds (aka trials) in my life.  These are the times and spaces where He is reflected and His goodness is captured for others to see.

I’m learning to expectantly wait and watch in awe as God puts His finishing touches to chapters I thought were closed and done. It truly ain’t over till He says its over!

For I am confident of this very thing, that He who began a good work in you will perfect it until the day of Christ Jesus. Philippians 1:6

They who dwell in the ends of the earth stand in awe of Your signs; You make the dawn and the sunset shout for joy. Psalm 65:8

I will sing of the lovingkindness of the LORD forever; To all generations I will make known Your faithfulness with my mouth. Psalm 89:1

“Do you know about the layers of the thick clouds, The wonders of one perfect in knowledge” Job 37:16

For Your lovingkindness is great to the heavens And Your truth to the clouds. Psalm 57:10

Clouds and thick darkness surround Him; Righteousness and justice are the foundation of His throne. Psalm 97:2

Who covers the heavens with clouds, Who provides rain for the earth, Who makes grass to grow on the mountains. Psalm 147:8

He lays the beams of His upper chambers in the waters; He makes the clouds His chariot; He walks upon the wings of the wind; Psalm 104:3

3 Replies to “A Cloudy Masterpiece”